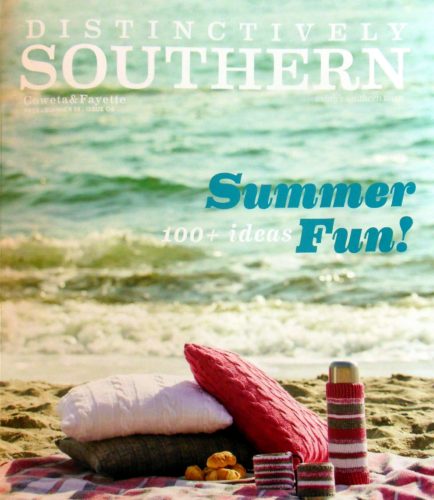 Linda Glenn Wilburn has a mission—to rejuvenate the economy of Greenville GA – one artist at a time.

Born and raised in Georgia, Linda first came to Greenville, the county seat of Meriwether County, in 1987.  At that time, she and her husband, Rod—a civil engineer and a planner– were living in Atlanta.  Linda was a busy professional—a commercial mortgage lender who worked a lot in historical renovation and was a player in the loft conversion craze that hit Atlanta in the 1990s.  She and Rod came to Greenville because they wanted to get away from the hustle of the big city.  They built a house in Greenville and maintained a part-time residency for 10 years until they decided to retire full-time to the sleepy town.

“Greenville was like an abandoned town,” says Linda.  “It had been going downhill since the 1960s.  Before then, it was booming.  There were all kinds of family business.  But then, they started building malls in the area, and all the shops moved to the malls or closed.  The downtown started deteriorating.”

In the mid-2000’s the Wilburns, along with a contingent of Greenville’s private citizens who believed Greenville could be restored, formed the Greenville Economic Preservation Society, a 501C3 non-profit.  The group joined forces with the Meriwether Garden Club and began activities to improve the look and livability of downtown Greenville.  With government funding, they began a streetscape project, re-landscaping the courthouse grounds and replacing sidewalks and street lamps.

Linda’s interest and experience with historic preservation took hold.  She was motivated and inspired at the idea of renovating Greenville’s downtown and bringing it back economically.  She and Rod decided to buy and restore two historic 1896 constructed buildings flanking the Meriwether County Courthouse—the Hill Brothers building and a building that once housed Charles Jones Printing.

“At first, I didn’t know what I wanted to do with the buildings,” recalls Linda, “but then, I thought of what Rod and I liked to do when we traveled.  We loved to look for local art, and there was nothing like that in Greenville.  Rural areas are natural draws for artists.  We realized that art could be a key to rejuvenating Greenville as well as small surrounding towns.  Unlike some other tourism draws, art could help boost Greenville’s economy without changing its rural character.”

The Wilburns went to great lengths to maintain the historic character of each of the buildings they renovated.  They reused every piece of reusable wood. They tackled the print shop building first, getting the building down to bare concrete walls and rebuilding the floors.  In 2011 they opened the Print Shop Gallery, providing artists in Greenville and surrounding area a place to display their work.

The renovation of the second building included stabilizing the outside with a new roof and windows and keeping the original heart pine floors and bead board ceilings on the interior.  The Wilburns converted the second floor into four loft apartments and established their second art gallery, Artisans on the Square, on the first floor, opening it in 2016.

Both galleries sell original art only, on consignment, and represent regional artists from Georgia and Alabama.  The Print Shop Gallery started with nine artists and has grown rapidly over the years, mostly by word of mouth.  Today, the 1,200-square-foot display area shows the work of about 40 artists, including painter Sue Christman and fiber artists JoAnn Camp, both from Meriwether County, and plein air artist David Boyd Jr. of Newnan and Steven Stinchcomb of Fayetteville. Artisans on the Square hosts six to eight Special Exhibits every year, featuring one or more artists and genres of art for a month at a time.  These exhibits introduce artists and types of art not typically experienced in the Greenville area.

With two galleries and a full calendar of art events breathing new life into its historic downtown, Greenville is becoming a day trip destination for people living in nearby counties like Fayette and Coweta.  Linda Glenn Wilburn has helped turned her town into what she and Rod have always enjoyed—a place with character where travelers can get away from urban life and immerse themselves in the uniqueness of local art and artists.