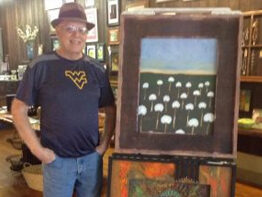 Arthur “Jack” Riggs from Franklin GA, considers himself an outsider artist, a term coined in the 1970’s to characterize self-taught, unconventional, and non-conformist artists whose creativity is not constrained by professional boundaries.

Growing tired of the increasingly hectic pace of expanding Atlanta, he ventured out and discovered Warm Springs.  He was smitten with the rich history of the area.  A few years later he met Dovie Jeter who had opened Antiques Unlimited Mall just north of Warm Springs and rented space there. He sold furniture from the 1930’s and 40’s which had become more popular than 17th and 18th century.  Thinking that he could build furniture less expensively than he could buy it, he started creating shaker style pieces, then began dressing it up by painting some Peruvian images to the furniture, which created a pre-Columbian feel.

In the 1990’s, Jack began to focus more on painting and he moved toward his experimental and fanciful pieces created on boards with his custom frames designed to fit each subject.

Arthur Jack Riggs considers himself a “Worker in Wood.”