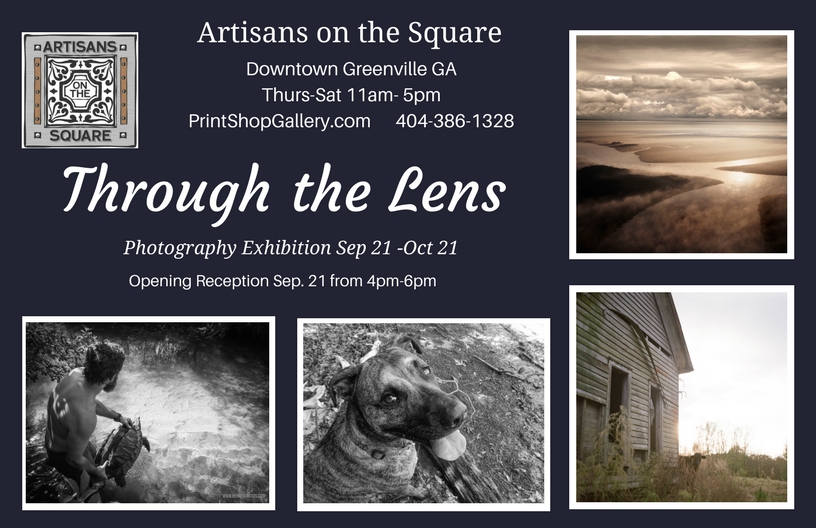 Through the Lens, a Photography Exhibition, opened September 21 at Artisans on the Square in Greenville, GA and will be on display until October 21. The opening reception included people from Greenville, Luthersville, Gay, Woodbury, Manchester, LaGrange, Fayetteville, Columbus, Pine Mountain, Woodland, Fortson, and Zebulon.   The exhibit includes 145 photos for sale by five talented photographers from LaGrange, Atlanta and Jackson MS, each with a unique theme to his or her display.

Henry Jacobs of LaGrange uses his camera to spread the message of protecting our waterways.  Henry is the outreach manager for Chattahoochee Riverkeeper and shares images that provide context and emotion, celebrating the features of the river that bring people together while also highlighting the challenges that remain

Ray Sullivan, Jr. of LaGrange exhibits photographs taken over many years of walking with his dog Bo along the banks of West Point Lake. The relationship with Bo and nature which developed over these years inspired his book of photography and poetry, Zen and the Art of Dog Walking (2015), which is also part of the exhibit. Cal Fussman of Esquire said.  “Every dog lover will immediately understand and love this book.  But it’s much more than that. This book will make you stop and think about how you really want to live your life – and then inspire you to do so.”

Diane Kirkland of Atlanta calls her exhibit Concrete Convictions, inspired when she began noticing statues of historic heroes and concrete yard art of religious and secular icons located in unexpected and incongruous places, which she finds visually interesting and culturally revealing.   Her exhibit also includes some Georgia landscapes.  Diane was the exclusive photographer for Oglethorpe’s Dream, a Picture of Georgia (2001).

Ashleigh Coleman of Jackson MS calls her exhibit “A Piece of My Heart”, which she left in Toccopola MS, a rural town of 250 people where she lived for 6 years.  While wrestling with her identity and place – newly married in a new state, a city girl moving to a small town, she developed an understanding and love of the community through her photography.

Robin Robinson 7000 Miles Behind Me